My First Week in Australia and the Generosity of Strangers

I landed in Brisbane, Australia on the evening of August 26th, 2012...a very important date to remember since I will have until exactly August 26th, 2013 to live and work here.

It was hard to believe that I had actually made it to this point. After almost two months of backpacking through Hawaii and Indonesia I had finally arrived in Australia (aka my launching point to backpack the world).

Last year when I had backpacked through Brisbane and Cairns, on the flight in between the two cities I made quick friends with an Australian named Tim and for almost 11 months we had kept in contact...and waiting for me at the Brisbane airport was he and his new girlfriend to pick me up and take me to his home almost an hour south in a town called Gold Coast, Australia.

He had promised me in January of 2012 that if I ever decided to come back to Australia for a more long-term visit, he would happily house me for free for as long as I needed to get situated and on my feet. I was more than thankful to accept his offer and was crazy excited to be there my first night. 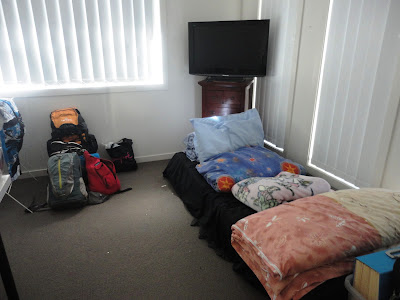 He had an awesome little mattress/bed set up in one of the extra rooms...and perfectly fit me and all my travel stuff :]

The next day he took time off work to show me the popular areas of Gold Coast, get me an Australian cell phone, start hunting for possible jobs...and to let me see the famous Surfer's Paradise Beach. 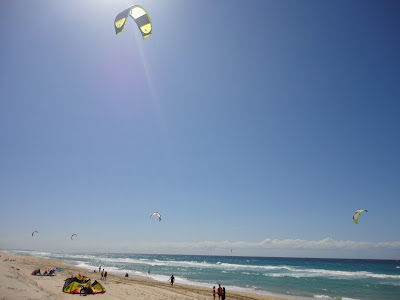 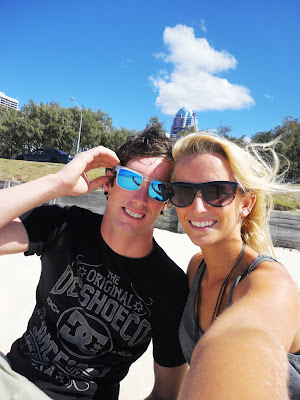 Everything was going great. I was excited to have a few days to relax without having to worry about work or money and recover from my month and half of adventures in Hawaii and Indonesia. Tim worked an hour north in Brisbane and that's also where his girlfriend lived...well after my second day, he went up to work...and didn't come back. Leaving me alone with his three roommates: Andrew (aka Ridley), Jasmine (aka Jaz), and her boyfriend Jeremy.

But thank god, those three people were absolutely AMAZING to me. They took me to the grocery store so I could buy food to eat while I was in the house, they taught me how to cook Kangaroo meat, and showed me around the city. I will forever be gratefully indebted to those three...who made sure that my first few days in Australia were going to be worth it.

After a few days there I knew that I would need to get an official Australian RSA (which is like an ABC license to serve alcohol back home in the States) and while I was at it I also took a barista training class...just in case. And after two days of classes and testing, I had all my qualifications!

Near the end of the week I realized that I was going to need to get out of that house eventually (since Tim was still AWOL and I was starting to feel super guilty bumming rides and favors and help from the three of them) so I started planning...

Initially I was going to buy a car with the rest of my money, then pick a city to live in and start working. My choices were between staying in the Gold Coast, moving an hour up to Brisbane, or going down to Byron Bay (where I had heard only amazing things). But after talking it out with Jaz and Jeremy, they made a valid point that it would be better for me to secure work and a place to live somewhere BEFORE buying a car.

So I hoped on the internet and started doing some serious investigation into hostels and apartments...but in the end I realized that whatever city I chose, I would need to make friends first so a hostel was the way to go. After calling around to a few I found one down at Surfer's Paradise that had a weekly rate discount...and immediately booked a week.

The next morning I packed up my few belongings (and without letting Tim know anything that I was doing) I said my goodbyes to Jeremy and Jaz before they took me in their truck to my new home. 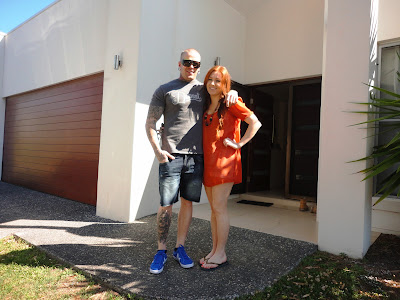 After just a week of knowing them I knew I was already gonna miss the hell out of them and their kindess...true Aussies right there!!

But Jeremy helped me bring my backpack into my new domain...Surfer's Paradise Backpacker's Resort. And within the first thirty minutes of being there...I knew that I had made the best decision.

What I didn't know was how much love, friendship, and good times were in my horizon...