How to Start a Life in Australia

Ever wanted to become an Australian...or at least a temporary one? Well here's my way to do it!

After spending the first week being stranded at my friend Tim's house, moving to the Backpackers Surfers Paradise Backpackers Hostel Resort was the best move I could have made. It was just a block away from the beach and a short fifteen minute walk to the heart of downtown Surfer's Paradise.

From the outside the hostel looked...well, pretty shitty if you ask me. A giant old brick wall surrounded the whole front of it, where a giant basketball court was situated in the middle with all of the dorm rooms and the kitchen and bar fanning around it. Then off to the side, behind the Office building was the pool. Behind the pool was a four story building where all of the apartment rooms were, and in the basement of that was the TV room, game room, exercise room, and sauna. And scattered throughout the whole complex were couches, hammocks, and picnic tables a plenty. 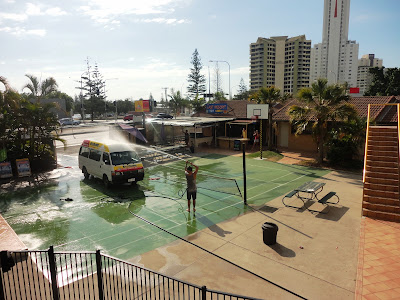 Another really awesome aspect about most hostels (especially throughout Australia) is that the employees are usually foreign travelers as well. And let me tell you what...staff can make or break a hostel. Seriously. Last year in Cairns, Australia the entire staff was German and refused to socialize or even to speak to anyone who wasn't German. It made the cool hostel a little less awesome and I'll never forget that. But here...well that was a completely different story.

The staff that I met my first few days was pretty much all from the UK but funny and wild as hell, who went out of their way to include me (and the other newbies) in activities and just normal goofing around. Within 24 hours I felt like I had found myself amidst a little family. 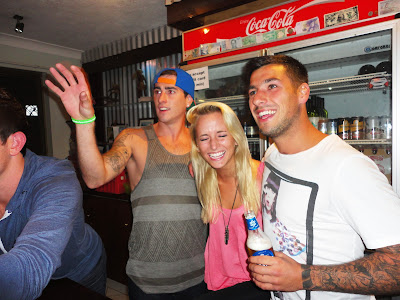 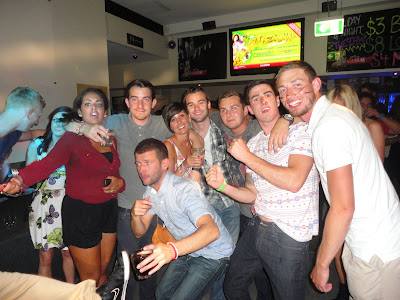 The hostel I was living in also catered to the social life (as you can glimpse in the above pictures). As most hostels do, they had two nights a week where a group called the Big Night Out pulled up in a giant bus and took us to town where we bar hopped four different bars all night. For the price of $30 you got your entrance into all four clubs, a free drink at each club, half price drinks all night, and a free bbq dinner that night at the hostel. WHAT A FREAKING DEAL. 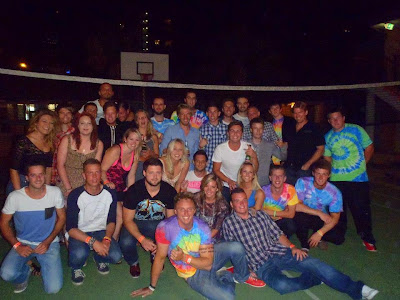 Yeah...that picture is just one of the larger nights we had for Big Night Out at our hostel. We kept setting records!! :]

In addition to the ridiculous amount of partying floating around, the hostel also had a volleyball tournament every night and the winning team was given free beer from the hostel bar. Sometimes the games got so intense we had some injuries...but it was always a blast. And a really great way of meeting the new people in the hostel. 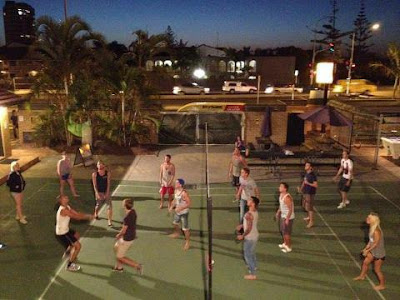 My dad always told me "Network, network, network. It's the key to success." And well, I couldn't agree more with him. Jasmine, one of Tim's roommates that had helped me out so much the week before, also ended up scoring me an interview at one of the nightclubs on the main strip in Surfer's Paradise for some work. So, my third day at the hostel, I got up bright and early, got dressed, and hopped on the free shuttle bus into town with my fingers crossed...

Now, I hadn't asked much about what the job was, because Jasmine had explained that I'd pretty much be working as promotion girl outside the club, trying to get people to come in. Sounded easy, and something totally up my alley so I didn't bother questioning it. But the one thing I should've asked was "What kind of club is it?"

For those of you who aren't familiar with Australian nightlife in the famous Gold Coast and Surfer's Paradise...let me tell you that it is NOTHING like Tennessee. The girls's working behind the bar at these clubs either wear only a bra and cheeky boy shorts, or a corset. THAT'S IT. And most of the girls who worked outside only had to wear skinny little dresses and heels. But when I walked up to my interview...I realized that it was at a strip club! Now, for those of you very Christian and Southern...DON'T PANIC.

I kept an open mind throughout the interview and by the end of it walked away as a newly employed girl! I was hired to work outside as the promo girl for a whopping $21 an hour!! After midnight it went up to $22 and on Sundays it was $23! Gotta love Australian pay rates!

Now, my job was pretty simple: wear a nice black skirt with a red top or a dress, heels, and smile pretty. EASY PEESY. And after my first two weeks there, I was promoted to a hostessing position inside where I was given a headset and managed the floor. But the best part about all of this...it turned out to only be a topless bar! And I didn't have to wear anything like the bartenders had to at the other clubs. In fact...here's what I wore my first weekend... 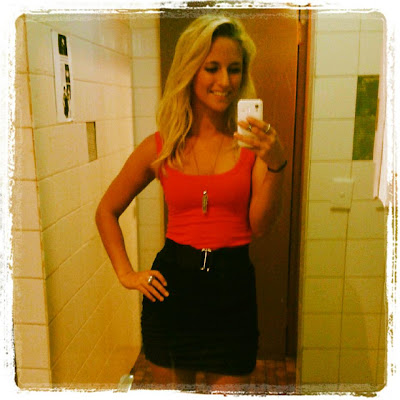 After my first week of work at the club (I was working from 8 at night to between 3 and 5 in the morning) I was approached by one of the girls working at the hostel that changed beds in the morning. She and her sister were leaving the hostel in a few days which meant that her position would open up. She woke up every morning at 8:30 to change all the beds of people who had just checked out that day. She wasn't getting paid hourly, but her rent was being paid for. So she was working to live for free.

Well, me being the little go-getter and penny-pincher backpacker I am, I immediately walked up to the owner, Brad, and offered him my name in the hat to fill the position...

So, low and behold, within the first 10 days of me moving to Australia I had a place to stay and TWO jobs!!! HELL YES.

Step three: Make a family with your friends.

Traveling the world can be pretty damn lonely...especially when you do it alone like me. But the beautiful part is that I'm never the only one. Everyone else in the hostel are lonely, scared travelers as well and when you get together...well the combination can be explosive. Within my first few days of being at the hostel I had begun to form a family with everyone there. 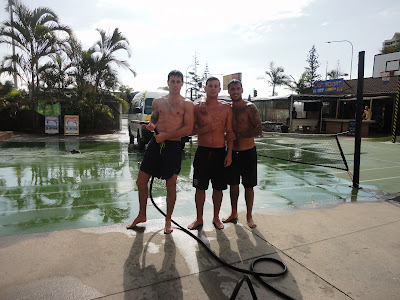 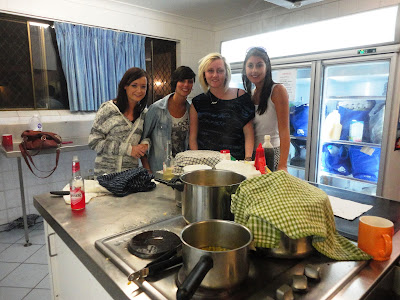 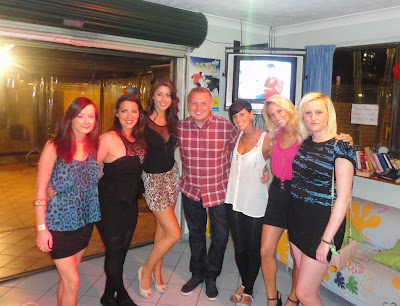 ...but the real kicker...the part I had no idea would ever happen here...was that I had finally fallen for someone. Fallen very very hard. :]