After two straight days of staying in my hotel room, I finally felt well enough to attempt to explore a bit of Jakarta, the capital of Indonesia. I took time getting ready, making sure to wear the most conservative outfit I could pull together, and stepped out into the big, dirty city. 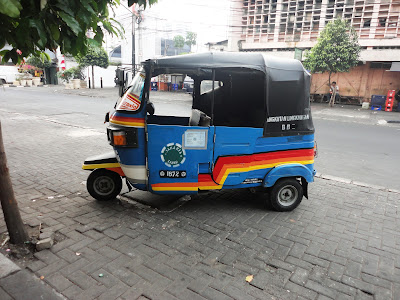 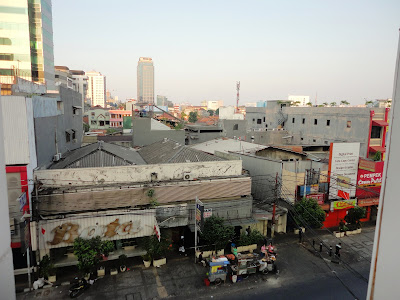 ...to find the city COMPLETELY empty.

No joke, I saw only two cars pass me down the stretch of road my hotel was on. I kept walking around the corner and down another block to the massive, famous mall...and found only Pizza Hut, Burger King, and Starbucks open. It took me a little while to realize why the streets were so empty...RAMADAN.

For those of y'all who don't know what Ramadan is, I'll take a nice little quote from the internet to better explain it to ya. "Ramadan is the ninth and holiest month of the Muslim lunar calendar. For those 29 or 30 days, Muslims, as a spiritual exercise designed to bring them closer to God through contemplation and humility, but not without joy and festivities, are required to abstain from food, drink and sex of any sort during daylight hours. They may indulge in all three at night, and often do so with gusto: Ramadan is in Islam what Thanksgiving is in the United States, an extended occasion for socializing, celebrating, and loving." So during the few days that I was in my hotel, the more serious part of Ramadan was occurring near the end of it, and most of the people in the city had gone home to celebrate with their families and loved ones.

The next two days I became close friends with the Starbucks staff, and managed to find a store open to buy plenty of gifts to send home to the family. By that point I was feeling like my old self again - though purposely avoiding Indonesian food and fruits. So after my four days in the hotel were up, I was more than ready to get out of there and spend my last four days in a hostel 15 minutes away. And the hostel was SO COOL. 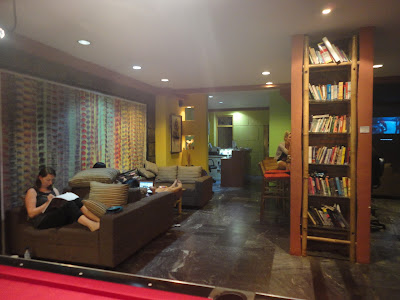 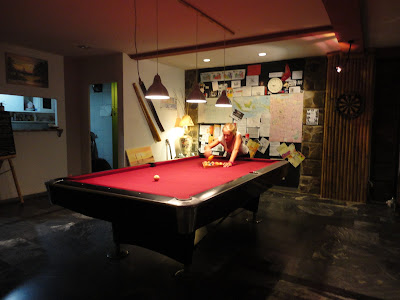 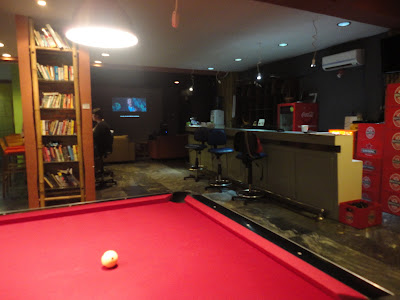 I instantly made friends with a group of people from the Netherlands and within the first two hours of being there, had a bunch of people to go grab dinner out on the town with. Yay for socialization!

The next morning the Dutch group had gone, but I had overheard a girl asking one of the hostel employees about places to go/things to do around town. Now, I had been wanting to go get a guided tour through the slums of Jakarta, but when I looked at the prices it just seemed a bit too much for my backpacker blood. (Normally I don't do guided tours in cities because I'd rather go explore myself, but in the slums in Jakarta, a city infamous for terrorist bombings, I decided not to go by myself.) Anyway I approached the girl that had asked the questions and ended up teaming up with her and her guy friend that she was traveling with. Her name was Nanna and his name was Martin, both of which were from Denmark. All three of us had fair skin, light blonde hair, and all three of us INSTANTLY connected.

So, on my second day in the hostel, the three of us set out on a long day of Jakarta exploration. And man was it an adventure! Ramadan was in full swing for the last few days of it and so the city was now alive with constant celebration. We found ourselves in the middle of a square full of families, bike riding, silly hats, and so much food my stomach almost burst (but not from being sick this time ;]) 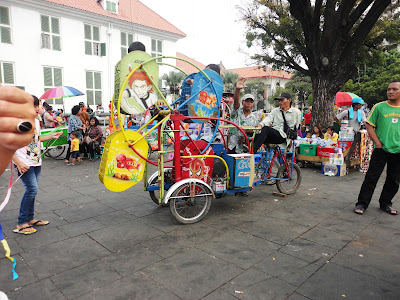 ...yes that is a man riding a stationary bike to power the make shift mini ferris wheel for the children! 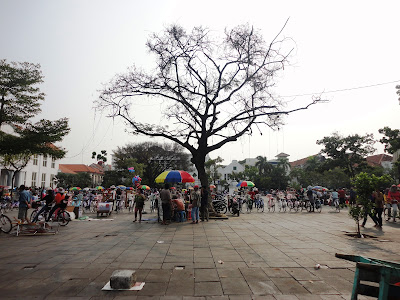 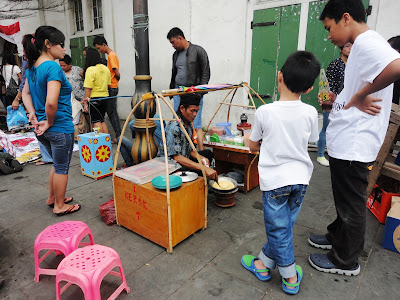 But it was in this square, amidst the mass of people that things started to get a little...weird. When you travel in Asia as a fair skinned person (especially as a blonde) you start to notice a lot more attention than you would receive back home. In Seoul, South Korea the year before people had actually stopped to take pictures of me as I sat at a coffee shop, but Jakarta was about a 100 times more intense than that.

Because of all the negative talk about Jakarta, tourists don't really go there...like, ever. All of the bombings, and terrorists and stealing and poverty has kept the majority of Indonesian tourism very very far from the capital, and because of that...people would actually point and stare the moment they saw the three of us. 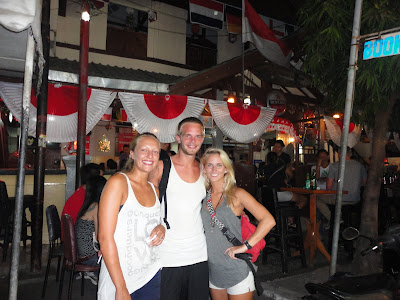 We were such a rare site that we actually got invited/pressured to join in on a family photography session! And then for the next ten minutes we had to take pictures on all of their phones with each one of them separately! 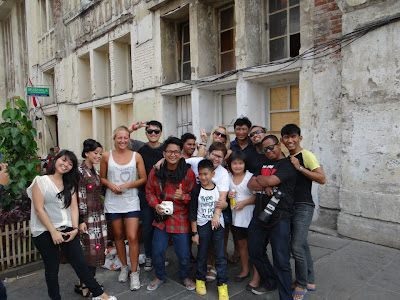 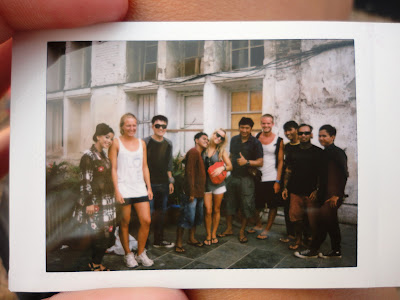 We finally broke away from the square to head to the famous monument in the middle of the city. The giant park all around the monument promised us a lot of room to get away from the crowds of people wanting pictures...but we were sorely mistaken. 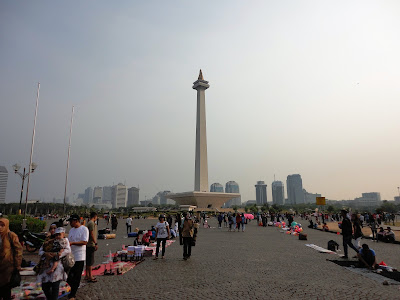 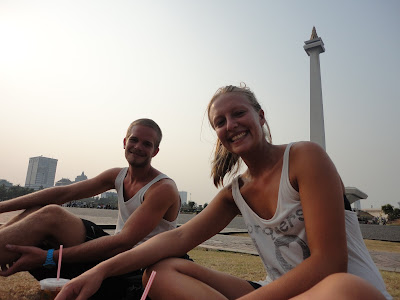 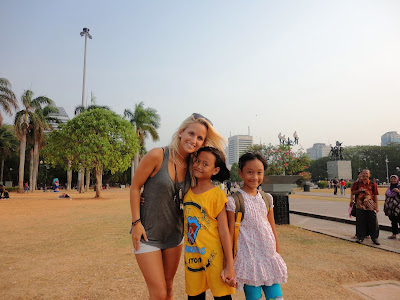 ...These little girls were too shy to ask to take a picture with me, so their mom asked instead. I couldn't say no!! They were so sweet. Then more kids wanted a picture with both Nanna and I, so we had Martin snag some pictures of it... 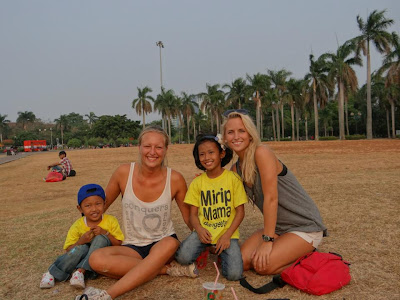 We easily took more than 30 different pictures with families and children in total that day. The first five times we laughed and laughed our heads off, and took it as sincere compliments, but after the 10th time, it starts to wear on you. We REALLY didn't like it when parents and grown men tried to take pictures with us. We actually said no a few times, but then there was this dad who squatted down a few feet from us and made his children take pictures of us a few feet behind him on his phone. So, rubbing it in his face, we motioned for the kids to come sit down and take a picture with us instead.

By the end of that night we were absolutely exhausted. The next day was a one of relaxing in the hostel (but the air condition was broken and the place was completely infested with mosquitoes and I counted no less than 30 bites on my legs alone!

Nanna and Martin left to go back home the day before I left for Australia, but we had one last night to enjoy each other's company and have a nice dinner. I really connected with those two.

The next day I wandered a bit around town by myself, before catching my 5 a.m. flight to Brisbane, stopping along the way in Kuala Lumpur in Malaysia to change flights. And on my 8 hour flight to Brisbane I made friends with someone that absolutely changed my life.

But after all that adventure, I finally landed in a town where fair skin and blonde hair, was no longer a traffic-stopper.

P.s. here's a nice little picture of my new purchase while I stayed at my hotel in downtown Jakarta...can't wait to wear it when I travel to other Muslim countries!! 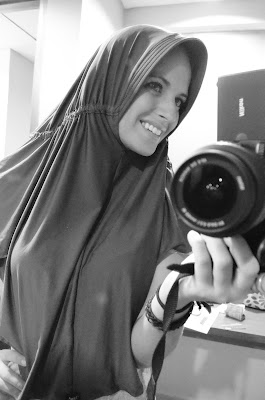