Why You Should SERIOUSLY Avoid the Water in Indonesia

The day after I completed my epic hike up Mt. Batu in the middle of Bali, it was time for me to take a 2 and a 1/2 hour plane ride over some more islands to the capital of Indonesia...Jakarta. There was only one problem: I was becoming INCREDIBLY sick.

But I didn't have that luxury. In fact, I only had two hours before I had to be at the airport to catch my flight.

I was sitting in my hostel restaurant  determined to just hang in there until I was on the plane and then in Jakarta, but the next time I went to the bathroom...there was blood. I was literally throwing up blood. Beyond panicked, I went to some of the employees in the kitchen to ask them where the nearest hospital was, explaining to them that I also had to catch a flight in a few hours. And me, in my American way of thinking, assumed that the hospital would make me late for my flight (because it takes HOURS in normal hospitals back home just to be seen). So then I started frantically planning to arrange another flight to Jakarta a few days later...but that day was the beginning of Ramadan...the biggest Muslim holiday in the world. And I was in the most heavily populated Muslim country in the world as well. Yeah, I was starting to realize that I might be royally screwed.

But one of the kitchen girls guided me to her scooter and drove me just four minutes away to a "Tourist and Surfer Hospital" right near the beach and told me to go in and that she'd wait for me outside. So, weak as hell, and already needing to use the bathroom again, I walked into the clinic and was received by the most kind and gentle doctor ever. There was only a reception desk and then one room with a door where the doctor conducted his interviews with his patients and luckily, he spoke very very good English. (A hard thing to find around most of Bali)

After probing my stomach with his hands, and asking me a serious of un-flattering questions...he prescribed me four sets of different pills that I needed to take twice a day. His diagnosis: I ate fresh fruit that had been washed in the local water, and my Westernized little body was not prepared for the onslaught of bacteria that accompanied the delicious mango.

The doctor, being an absolute sweetheart, also wrote a letter to the teller at the airport check in, asking to place me in a seat as close as possible to the bathroom, since I would probably be needing it while traveling to Jakarta. But by the time I made it to the airport an hour and a half later, the pills the doctor had given me had worked to keep all the "bathroom necessities" out of the way while I traveled. Thank goodness.

By the time I landed in Jakarta, all I wanted was to get to my hotel (which I had booked for the first four days instead of a hostel because I absolutely had to have my own bathroom and bed for a few days). I was warned about the deceptiveness of taxi drivers in Indonesia (especially in the capital) and was fully prepared to counter-offer relatively low when one taxi driver was explaining how long it would take to get through downtown where my hotel was. I informed him that I was quite aware of Ramadan and that there was actually no traffic on the roads for the next few days...And so he begrudgingly accepted my bags and flew down the empty interstate (I mean at speeds of at least 80 mph back home) until we arrived at my very chic hotel, in the middle of the dirtiest and creepiest street I've ever seen. But as soon as I was inside the front doors, I fell in love with the strange, fun, and quirky designs throughout the hotel 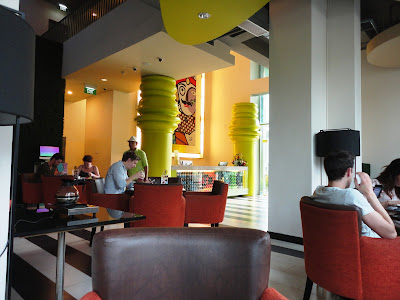 ...and then I was immediately being hit on by the man working the front desk. I politely declined his offer to take me to dinner (since all I wanted was to sit in a shower for the next few hours) and headed up the elevator to my room...and almost cried I was so happy. 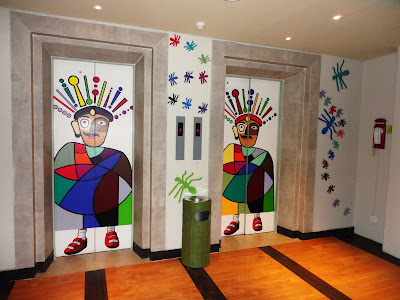 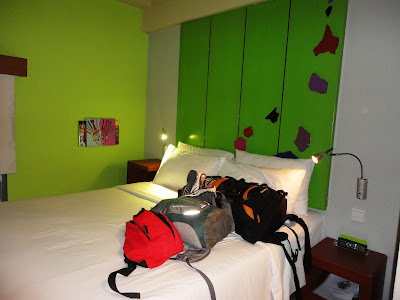 ...And this is where I stayed for the next four days. Not leaving my room except to go downstairs to the 7-11 type shop to get food and water. And man did I write.