Saying Goodbye to Hawaii and Hello to Two Days of Travel

One of the hardest things about travelling is having to say goodbye. Whether it be goodbye to new people you met, old friends you visited, or the place itself...saying farewell is always a challenge. And Kauai was no different.

After the four of us had made it up to the top of Koke'e we only spent one night in the freezing cold before we realized that we all wanted to cut the trip a day short. So, we packed our things and set off to hitchhike back down the mountain. Two hours later, low and behold, the same weird Canadian couple that had camped with us in Polihale ended up picking us up and taking us back down the mountain. What luck! From there we caught a two hour long bus ride across the island to Phil's farm.

The next few days back in civilization went by quickly, and a new friend I had made while in Kalalau ended up being a gracious host and providing me with my first real, hot shower in almost two weeks! It was beyond glorious. And then, I practically glued myself to a bar to watch the Olympics I had missed the first opening days of. I freaking LOVE the Olympics and was a little upset to miss so much of them.

But before too long I had to say my goodbyes and catch my LONG flights to Bali, Indonesia. A few hours before my flight out Phil, Maisha, and I all sat at an amazing little coffee shop to say goodbye. 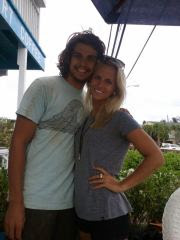 But the goodbyes weren't sad, because Phil and Maisha were about to head off on their own epic journey in a week and we had plans to all meet back up again somewhere in South East Asia at the beginning of 2013. So it won't be a very long goodbye.

I made it to the airport to catch my short flight back to Honolulu where I spent one last night with my old friend Grant, where we sat up watching the Olympics with his roommates before bed. Then, in the morning I treated him to a big breakfast as thanks for his hospitality before saying goodbye (yet again) and catching my 11 and a half hour flight to Manilla, Philippines.

On the plane I sat next to one of the kindest, most genuine woman I have ever met named Emily. Emily was born in the Philippines but is now a U.S. citizen and lives with her husband in Honolulu. We talked nearly the entire trip about her family, and my family, and my travelling plans. She was absolutely blown away by all of my travel plans and only had encouraging things to say. By the time the flight was over I felt like she was a new mother to me and in fact, after she and her brother had walked with me out to the main terminal, she pressed twenty five dollars in my hand against my protest. "Use this to get something to eat," she told me. "And take care of yourself, girl". Seriously, my heart almost burst from her kindness.

I had to go through security all over again to catch my connecting flight, but ended up bonding with a backpacker couple from America on my way through. They were headed to Jakarta while I was headed to Bali. On our way back through security I encountered a first ever experience...the line was split in half...men through one scanner, and females through another. SO WEIRD! I guess it makes sense since the security is really old so they have to do actual pat downs and females need to pat females, but still...strange.

The terminal we had to wait in was super small and only had three little food stands. But they had "laptop stations" all over. Big desks with chairs and international outlets for you to use the power and wifi for free. That was really nice. And that's actually how I began updating my blog after two weeks in Kauai!

I ate some food and caught up on the Olympics, meeting another man from America on his way to Jakarta for business and had a really nice chat with him before we all boarded our three or four hour flight to Jakarta. The flight was alright, but freezing cold and very turbulent, and we landed in Jakarta just after midnight...and my flight to Bali wasn't until 6:30 in the morning. Which means I had to spend the whole night in the Jakarta airport.

For those of you who don't know anything about Indonesia, it has the largest Muslim population of any country in the world. And all I've ever heard in America is horror stories about it. But as I made my way through customs and immigration to collect my luggage, I had no problem or bad looks at all (and I was wearing shorts). In fact, after I went through immigration the guy who checked my passport ended up asking me to dinner/breakfast. And we turned out to have a blast talking together! 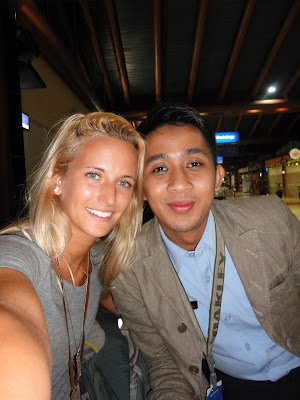 Yeah, this is what it looks like after you travel for over 30 hours!

But after saying goodbye I boarded my quick flight to Bali and landed in the craziest, dirtiest, loudest, most amazing city I've ever been in...just wait till you hear more!!!