How I Learned to Hitchhike

We left our campsite with all of our camping supplies and food on our backs before 10 in the morning. The original plan was for a friend to come pick us up from our campsite to drive us up to Koke'e and go camping and hiking with us for the next few days. But late the night before we got a voicemail from him...he wasn't going to be able to make it anymore.

He was very apologetic, but we were kind of screwed. It was the night before we were scheduled to leave and Matt and Kelsea had taken the truck back to the farm earlier in the day. The farm is on the exact opposite side of the island. There's no way any of Phil or Maisha's friends could come pick us up, and Mike didn't have a car. So there was only one option left...

Now, back home in Tennessee NO ONE hitchhikes. In fact, I'm pretty sure it's illegal throughout most of the mainland, if not all of it. It's just too dangerous. All of the horror stories you hear and the freaky stuff that happens...especially if you're a female. It's just out of the question.

But here, in Kauai, apparently everyone hitchhikes. As we started our walk out of the beach campsites Maisha was telling me about how she, her mom, and her three brothers used to have to hitchhike all the time when she was younger. Sometimes they just didn't have a car. And people would always pick them up. Phil didn't have a car for his first few months on the island and also had to hitchhike everywhere. There are so very few people on the island, and everyone trusts each other...you'll always have a local pick you up at some point.

So I grew a pair and agreed to attempt hitchhiking. Plus, I was with three other people, so I'd be safe. But that was the problem they were all worried about. Hitchhiking with two people is generally hard, but four...it had them all nervous.

But I kept my hopes and spirits high and we were only on the main road for about 20 minutes before a woman in an old jeep pulled over to pick us up. She was a yoga instructor from Florida who was in Kauai for some yoga instruction type thing. She was so nice and happy and before long all four of us were dropped off safely back in town at a shrimp shack for lunch.

The road up to Koke'e was right across the street, so after lunch we put on all of our gear again before heading up the road, our thumbs out for every car that passed. A lot of empty trucks kept passing and as the minutes continued and the road grew steeper and steeper we started to get anxious. But finally, a small SUV pulled over and we all hoped in. It was a dad and son who had just flown in from Australia. They had their two suitcases in the back and because we had so much gear, I had to sit in the trunk with everything while the other three squished into the backseat.

It wasn't comfortable, but the company was fantastic. The dad and son were initially from Boston, but had been living in Sydney for the last two years and stopped in Kauai for a few days on their way back to the States. I was able to talk to the dad a lot about Australia and the differences and he gave me some good advice about Sydney. The son did not seem happy at all that his dad had picked up a bunch of hitchhikers his age, and didn't utter a word. You could tell the father was aching just for some conversation.

And as we drove up to Koke'e I became unbelievably happy that they stopped to pick us up because the road got really narrow, windy, and it would have been nearly 5 or 6 miles of hiking uphill before we got to the big Waimea Canyon Lookout Point where we were dropped off at.

Waimea Canyon has been called the Grand Canyon of the Pacific by some, and I had heard a lot of great things about it before getting there. But let me tell you what...laying your eyes on it is an entirely different experience. 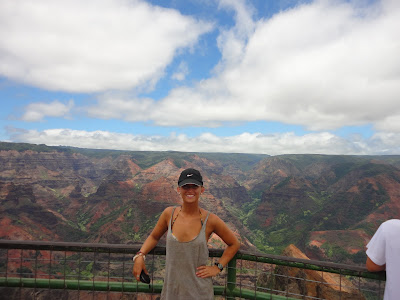 We realized (too late) that we still had another four miles to go before we got to the campsite at the top of the mountain next to all the trails. The four of us started walking but because the road is so narrow we had to stop at a lookout point and wait there. But an hour rolled by and no one had stopped. So we decided to split up and Mike and I started walking.

Thirty minutes later we saw Phil and Maisha waving to us as they passed in a car. They had gotten picked up, that was good, but we were still walking. And the chacos I was wearing had dug some nasty holes into my feet that were starting to bleed and Mike's bad ankle was starting to cause him to limp. So we had to stop and wait.

Another hour passed, and just as I was about to give up on the kindness of humans, the most amazing older couple from Texas stopped to pick us up. And boy were they happy to chat with us! They had two daughters our age who had just left after a week in Kauai with them. They kept chatting all the way until they dropped us off at the campsite where we saw Phil and Maisha sprawled out on the grass waiting for us.

Then the couple wanted a picture with us so they could send it back to their kids. And then they told us the most small-island story of the trip...four days earlier when they had taken their daughters to the airport, they stopped to pick up a hitchhiker who was also on their way to catch a flight. And the reason they stopped to pick her up was because of her short, beautiful, curly blonde hair...and her name was Roquel. The same Roquel we partied and camped with for the entire time in Kalalau!! Hahaha. Incredible, right?

Hitchhiking is quite an incredible experience, and I would recommend it to anyone in a heart beat...as long as it's in an area where it's common to do. And the man from Boston/Australia had told us that his older son backpacked through Europe for a few months, and he picked us up because he would want his son to be picked up by safe people all the same. And if I'm ever in the situation where I can pick up a bunch of travelling hitchhikers...I'm doing the exact same.