How I Discovered the Moodswings of Poseidon and His Ocean

Our 14 day kayaking/camping trip officially began the night of Thursday, July 19th, 2012. All day Thursday the three of us (me, Phil, and Maisha) drove around the island picking up the kayaks, more food, more gear, and dry bags to get ready for the big trip. Later in the evening we picked up three very special people from the bus stop: Sean, the guy from Australia that I had met the day before/my kayaking buddy, and Matt and Kelsea, a couple from northeast on the mainland who were also living and doing work trade on the farm with Phil.

We waited until the lifeguards had left Ke'e beach before dragging all of our gear (and the kayaks) a ways down the beach where we could camp without having to worry about getting in trouble for it. We lit a fire, made some yummy dinner and enjoyed each other’s company, singing and talking about literally anything and everything under the sun before all heading to bed since all 6 of us were going to be waking up pretty dang early. But check out this view at Ke’e…that's the very beginning of the famous Nepali coastline. 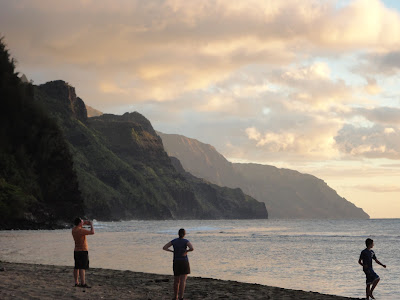 So on the morning of Friday the 20th at 6 am exactly Phil, Maisha, Sean, and I headed out in our kayaks for Kalalau Beach (which is only about 6 miles away by water). Matt and Kelsea started the grueling 11 mile hike in at the same time as us but won’t get there until much later in the day since it will take between 5 and 6 hours for them. So our plan was for the four of us to kayak in and set up camp before meeting back up with Matt and Kelsea in Kalalau. Sounds simple, right?

From the get-go Sean and I were obviously the weaker kayak team. It was my first time ever kayaking on the ocean and only my second time kayaking in general. Sean said he had kayaked a bunch before but we didn’t have a rudder in the back which made steering in the waves an absolute chore for Sean. Luckily, it was still really early so the waves weren’t too bad and we were going with current the whole way down the first chunk of the Nepali coast towards Kalalau. But Sean and I weren’t keeping rhythm near as well as Phil and Maisha were and after two hours we were super excited to finally spot the beach.

But then I realized we’d have to beach our kayaks on shore…and I’ve never beached a kayak before in my life, let alone with big swells crashing all over the place. But Sean told me to relax and we’ll just ride the little waves in and all will be fine.

Phil and Maisha were really far ahead of us so we watched them beach first without a hiccup. So I thought to myself, oh we totally got this…

It was like a scene straight out of a damn movie as Sean and I approached the shore line.

Phil and Maisha were trying to signal for us to stop but we were paddling full speed right as the wrong wave crested in the wrong place…and sent us both tumbling out into the water as the kayak rolled over us, spilling our dry bags and huge tubs of food and supplies for the next two weeks everywhere.

I immediately got to the surface and started running after all of the stray items with Phil, grabbing the box of food and a flipper and water bottle. But as Sean and I stumbled onto shore, I realized that the mask and snorkel I had gotten in Australia last year was long gone and in Poseidon’s grasp now. I immediately jumped back in to try and find them, but to no avail. We were all tired and exhausted, and pissed at losing things from the kayak flip, not to mention the embarrassment of flipping a kayak in front of an entire beach. (Sean lost sunglasses and Phil lost a flipper and a cooking pan, but everything else we managed to salvage).

Then Phil and Maisha spotted a huge empty cave at the end of the beach that they wanted to set up camp in…nearly a mile down the beach.

After we walked all of our dry bags, pots and pans, and boxes of food down to the cave, we had the horribly daunting task of dragging the kayaks down to the cave as well. All four of us were too spooked from the crash to try and brave the increasingly growing surf to just paddle them down so we did the next logical thing: pull them down the entire freaking beach.

There have been only a handful of times in my life that I’ve been that exhausted from something, and that lugging those waterlogged things for a mile down a beach just catapulted to the head of the list. I was so exhausted in fact, that all I could do was nap and tan for the next few hours until Matt and Kelsea arrived from the trail to see our new home. But I quickly realized that all our labors were definitely worth it. 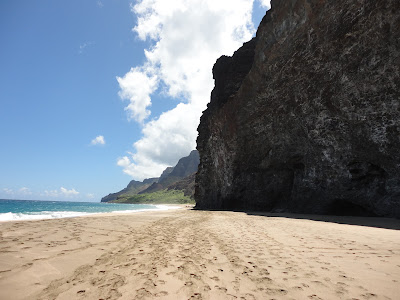 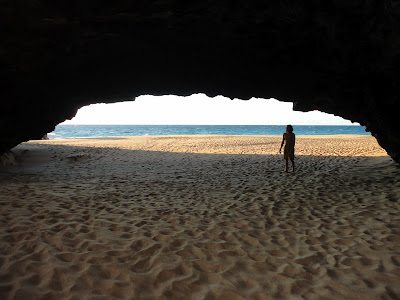 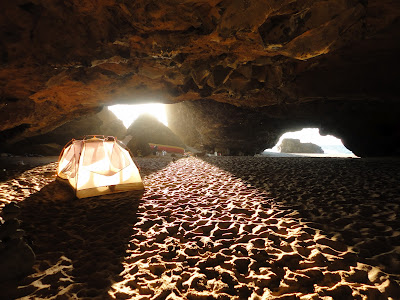 So it was just the 6 of us before we met an amazing brother and sister team from San Diego and New York (Andrew and Nicole) and we instantly adopted them into our group which meant that 8 of us were now staying in the cave…and we still had plenty of room.

But all of this was just the start of the most incredible journey in Kalalau.And at least after the fiasco of this morning, I now better understand just how moody Poseidon can be.