My First Impression of Kauai, Hawaii

So, first off I want to apologize for taking so long with updating my blog!

After my first week in Oahu I headed up to the mystical island of Kauai, Hawaii and ended up camping for 12 days straight. Needless to say I wasn’t around “real-world” amenities until just the other day. But don’t worry, because boy do I have some sweet blogs in store for you!

At the moment I’m sitting in Manilla, Philippines at the airport watching it pour down rain outside, munching on some banana chips and a big ole can of Coke. I’ve got a few more hours to kill until my flight to Jakarta, Indonesia so I wanted to take the opportunity to put up a few posts for y’all to drool over. Here we go…

I was pretty excited to leave Oahu for Kauai, seeing as I had been wanting and expecting a much more traditional “Hawaiian” experience than Oahu is capable of giving. Unless you like the super cheesy, touristy crap. Then that’s definitely the place for you!

I landed in Lihue, Kauai on Wednesday, July 18th completely ready to embark on the new leg of my journey. The person driving an old ’92 pickup truck to come pick me up from the airport is an old friend that I had not seen in almost two years.

I've known Phil since I was in high school, but we really didn't become better friends until we attended the same University outside of Nashville, Tennessee. But as most friendships go, we ended up falling out of touch for a bit until earlier this year when we both realized how similar, yet different our new life paths had taken us in the past two years. While I graduated and packed my bags to backpack the coast of Asia and Oceania last year, Phil packed everything he owned and moved to live and work on a farm in Kauai. 1) I was shocked that Phil would ever do such a thing and 2) I was shocked that such a thing was even possible! Needless to say we ended up getting in touch again and began rekindling our old friendship into new levels we never would have been capable of before. In fact, he’s the reason I decided to stop over in Hawaii in the first place! 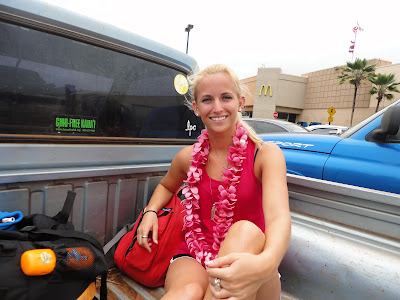 He greeted me in the back of his pickup truck with a beautiful Hawaiian lei (but please ignore my horrible hair in the photo. It was raining pretty hard that day.) His two friends Maisha, a beautiful local island girl and Sean, a traveler from Australia stayed in the cab of the truck while Phil rode in the back with me and all my stuff. And we immediately went to work going on errands to pick up food and supplies we were going to need for our 14 day camping trip we were beginning the next day. It was going to be the four of us kayaking and camping along the famous Nepali Coast: Phil and Maisha in one kayak, and Sean and I in the other.

After a few hours of running errands Phil swung me by the local farmers market that happens every Wednesday in order to show me the stuff he’s been doing for the past year and a half. I was able to meet the owner of the farm Phil works on and another girl and got to sample a bunch of delicious, locally grown fruit and veggies from all over the island. After that he took me up on a quick hike to Sleeping Giant which gives you an incredible 360 view of the eastern part of the island.

And I was in for a big treat that night because all the people living on the farm were having a big pot luck. Phil and Maisha are moving to California the second week of August to work and travel over there for a few months so it was also kind of like a going away party for them as well.

When I arrived at the place Phil has been living for the past two years I was instantly shocked. He literally lives in a tent on the middle of the farm. No electricity, no bathroom, no hot water (but at least there was running water). I was instantly blown away. This did not seem like the Phil I remembered from school! 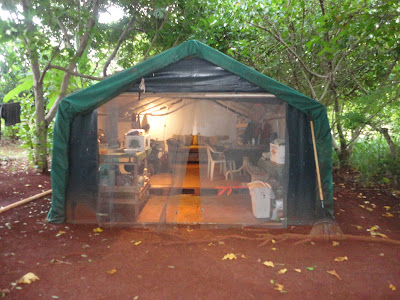 But the more he explained about his lifestyle, and in fact this whole concept of the lifestyle in general, the more I began to embrace it. That’s what I’m traveling for in the first place, right? To learn about all new kinds of things, and especially new ways of living life. I just had no idea I would find such radical changes still in the United States!

So here’s a little list I gathered of the major differences I noticed from my way of life back in Tennessee:

-No electricity. Phil and Maisha have a portable solar panel/charger/outlet they use instead. They also have a super portable solar panel to charge phones and cameras on the go while camping or traveling. REALLY handy. This also means no radio, no tv, no microwave, and no fridge.

-No hot water. Which means they're just lacking the comfort of a hot shower. Not bad when it’s a hot day on the farm. But I’m too much of a pansy for cold showers most of the time.

-No bathroom. The shower is totally out in the open. You pee in bushes and poop in a bucket that you layer with dirt before and after you do your business. But the bucket has a little toilet seat on top and by doing it in a bucket, it turns into its own kind of compost/fertilizer.

-They have their own private gardens around each little tent or yurt in addition to the main garden everyone works on for the farm. Being able to have your own plot of land to do whatever you want with in exchange for some manual labor during the week is a pretty cool little concept.

-Picking food straight out of the ground (or tree) and putting it directly into my mouth was the craziest thing I’ve ever experienced and I am for sure now going to have my own garden whenever I decide to settle down.

-The idea of composting is a little foreign to me. Not a lot of people I know do it, but I don’t see why not. It’s so simple and good for the environment and your yard! Another thing I plan on adopting in my lifestyle.

The potluck was an absolute hit and getting to meet the other people on the farm (and some people from other neighboring farms) was incredibly cool as well. Some of these people have lived like this their entire lives, never owning a microwave or a TV. And others used to be corporate hot-shots in big cities that absolutely hated their lives and now want to do life as simple as possible. And then there are the people who are just doing it for the experience and the freedom.

It was a lot to comprehend for my first day, and a lot for me to force y’all to read about on my first post back after two weeks.

But wait until you hear the rest of this stuff…