So Much to See and Do in Kalalau!

It was only our first full day camping at Kalalau when I realized just how freaking much there is to see and do there. The cave we were staying in was surrounded on each side by two wet caves that four of us instantly demanded to explore. Like the kind of caves where you wear your headlamp and slip into dark, freezing water to swim in just to see what’s at the very end? Yeah, I was screaming like a little bitch the whole time (excuse the French, but it’s true. Ask Phil, Kelsea, and Matt. I was pathetic AND the only one with a headlamp.) But we explored the crap out of those caves that are usually completely underwater during the winter time. And I got a refreshing dip in some ice cold, semi-salt water.

After the cave exploration and a little lunch me, Phil, Maisha, Matt, Andrew, and Nicole all headed around the end of the Kalalau Beach to a sacred beach called Honopu. But because it’s so sacred to the Hawaiians you aren’t allowed to beach any sort of vessel on the shore…which means you gotta swim. Which was no problem for me, but the current was a little tough to fight and there were some gnarly rocks at the tip of it. But it was 100% worth it. Watch this video to see first-hand how incredible this place is!

At the end of the first stretch of the Honopu beach is a huge arch/cave that leads into another secluded, sacred beach with a stunning waterfall nestled in the very back. Maybe it was a combination of hearing about all the supposed magical powers and energy about Kalalau, but the moment I slipped underneath that waterfall, I felt like I was being purified by Mother Earth herself. 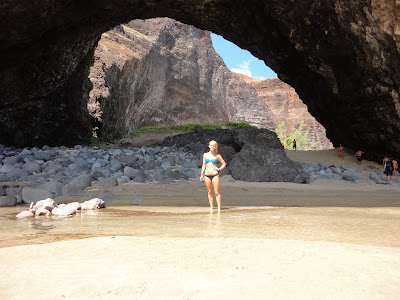 Now, I know that sounds crazy hippy, but I’m serious! I felt something there that I haven’t felt before and after just a little dip under it I felt beyond refreshed.

The 6 of us spent the next few hours playing around in the waves and mooning the dozens of giant tourist boats and helicopters that zoom by every ten minutes. Yeah that’s right, we mooned them! Well, I didn’t that time. Not yet at least!

But after a full day of exploration we were all pretty tired and ready for a big dinner. After we cooked a huge pot of pasta and tofurkey dogs for dinner, Phil, Andrew and I were laughing as the waves pounded us while we tried to clean the dishes when three new people approached us from the darkness…And the night quickly turned into one for the record books…

Stay tuned to find out why ;]