After 8 days of camping in Kalalau, we were ready to embark on the next leg of our journey...kayak nearly 26 miles around the Nepali Coast.

Since Sean, the Aussie that had paddled into Kalalau with me, had bailed on us earlier in the week, we found ourselves one man short. But thank goodness, Kelsea volunteered to hike the 11 miles back in on Friday night so that we could all kayak to Polihale Beach on the other side of the state park around the north shore of Kauai.

When Kelsea had left us the weekend before she joked that she would bring us a big box of pizza (since we knew that we'd be dying for some "real" food after more than a week of camping food). I had also begged her for a cheeseburger (because apparently that's all I could think about while camping). So Friday afternoon, all three of us were intensely anticipating Kelsea's return...because we knew she'd bring us something, we just had no idea what that something would be.

Just a few minutes before sunset, Kelsea arrives at our camp...carrying a literal pizza box in her hands!!! That amazing woman had hiked 11 miles with a bag of 8 giant slices of pizza for us...and a cheeseburger for me! I think I nearly fainted on the spot. (She hadn't actually carried the pizza box the whole way, but had folded it up into her backpack so that she could pull it out before camp and freak us out like she actually hiked the whole thing with a pizza in her hands.)

After a night of feasting, and super full bellies, we all packed up the majority of our stuff before heading to bed. We were going to get up at 5 so we could get on the water by no later than 6. The swells get pretty gnarly at Kalalau so we wanted to be able to get out there with no problems. And I definitely didn't want another disaster beaching it like I had with Sean.

The next morning I took down my hammock and packed my little bag and all my belongings in my dry bag before helping pack all the food and cooking supplies. Once we had everything strapped and situated onto the two kayaks, we all took a deep breath, and took the plunge.

Maisha and Phil helped push Kelsea and I out to sea...and it was a success! Then we floated close to shore waiting for the two of them to get out there and join us. After that it was pretty smooth sailing from there. We were paddling with the current and since it was still so early in the morning, there were hardly any swells to fight. And the scenery...my god the scenery from the kayak was absolutely incredible. 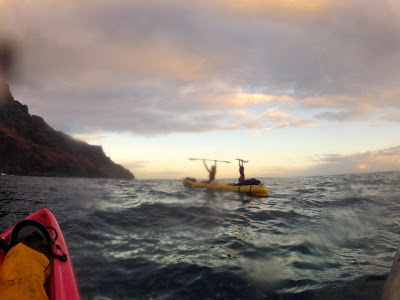 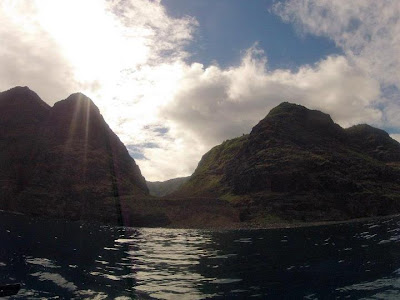 After about an hour and a half of kayaking we stopped at another beach to meet back up with Eric and Mike. And luckily, they were more than happy to split up so that Kelsea could paddle the front of their boat with Eric in the back, while Mike hoped into the back of mine. It was just going to be a lot easier to have all three guys at the back of all three kayaks.

It was around 9:30 in the morning when (after some serious meditation with Mother Earth) we finally saw our first pod of wild dolphins...and they just kept coming. We were literally only a few miles from our destination at Polihale when nearly 50 dolphins were swimming and jumping and flipping all around us. A few little babies too! So then we all decided to jump out of our kayaks and get into the water with them... 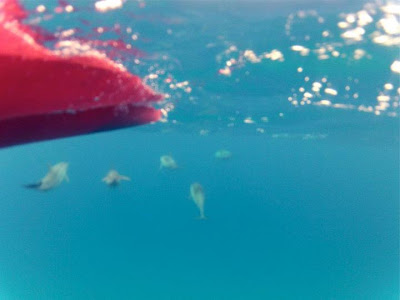 And the day quickly turned into the most amazing/special/magical day of my life.