Our First Night at Polihale Beach

This time when the six of us beached our three kayaks onto Polihale, NO ONE CRASHED! But just to be sure, Mike let me bail out of mine a few feet from the beach while he beached it, and I swam in like a little pansy. But after the fiasco I encountered trying to beach at Kalalau I was not about to go through it all again. Thank goodness I had Mike and Kelsea had Eric (she also swam to shore with me). Phil and Maisha beached theirs like pros (of course).

When we landed I learned more about Polihale Beach. It was absolutely packed that day, full of cars (A site I hadn’t seen in over a week!) and tents and literally close to hundreds of people. Apparently there was a big celebration going on. And mostly only locals go to Polihale because you can only drive to the beach if you have a 4 Wheel Drive. It’s an absolute monster of a road to get in, and then to drive a car on the sand takes some horsepower as well.

As we were gathering up the kayaks and hunting down a spot for us to camp for the next few days, every single person in the group told me to keep my shoes on as I walk around. There are vicious thorn trees all over the entire beach and when people drag firewood across the sand, the little thorns fall everywhere. I couldn’t possibly imagine why such nasty trees were near the beach, let alone on Hawaii (all the plant and animal life is so beautiful and peaceful here and these trees were so scary looking). That’s when Phil explained that when the first Christian missionaries had come to Hawaii, they planted thousands of these trees in front of the beach in order to keep the Ancient Hawaiians away from the place. The Hawaiians used to party there a lot (they still do) because it was a sacred beach to them, but their celebrations were part of their religion and culture. And the Christian missionaries didn’t like that one bit. So they planted these foreign thorn trees in order to keep them away.

How messed up is that? Like, I could see building a big fence or guarding the beach or something, but these people planted trees. Trees don’t grow overnight. These freaking missionaries wanted to keep the Hawaiians away from there for GENERATIONS. That, to me, is beyond messed up…something as permanent and continuous as planting trees. But I’ll tell you what, I think all of us got serious satisfaction from hacking those things down for firewood…and they burn better than any other wood I’ve encountered to date. So…SUCK ON THAT, MISSIONARIES!

Anywho, we managed to find a little campsite with a picnic table next to bathrooms and a shower and away from the massive crowds on the beach. We were all beyond excited to have running water and showers…until we realized that the reason no one is camping around there is because the showers don’t work. At least the sinks and the toilets did!

We all set up camp. I had my hammock, Phil and Maisha had their tent, Eric had his tent, and Mike and Kelsea had their own separate sleeping arrangements on the ground. Then we had to wait…because Matt was driving in Phil’s truck laden with our box of new supplies for the next week of camping AND hopefully some nice little goodies.

Eric and Phil went fishing with some spear guns down near the reef a mile or so off shore while the rest of us just relaxed and hung around. It was freaking HOT at this beach and apparently that’s exactly what Polihale is known for…the unbearable heat.

Then, our other angel came straight from heaven...with Phil's truck full of ice-cold beer, hot dogs, and all the making for smores. Matt pulled up to our campsite and we all went crazy haha. It was great to have him back in the group.

Shortly after Phil and Eric came back to the camp with 8 fish they had speared out of the water...tonight we were going to feast! Beer, quinoa, fresh vegetables, and fresh grilled fish. Then smores afterward for desert. God it was a great day! 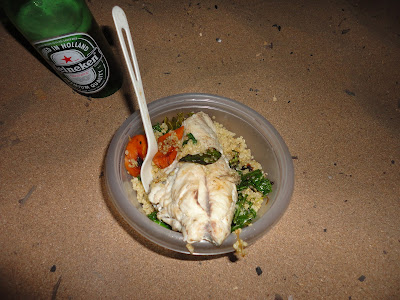 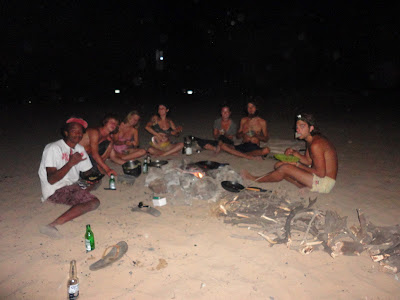 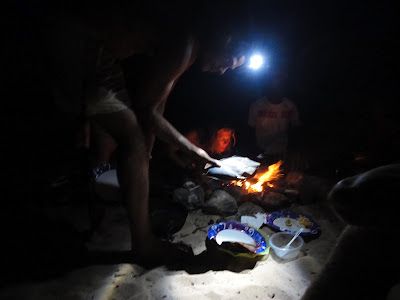