As a solo female traveler, I have a certain amount of rules that I've created for myself to adhere to while in foreign countries. One of those rules happens to be not to party...but when I'm with a group of people that I trust, I give in a little bit. I never get anywhere near as drunk as I would with my best friends back home, but still...sometimes it's good to let loose a little bit. And luckily, my first full day in Bali I stumbled across some of the most amazing people I've ever met... 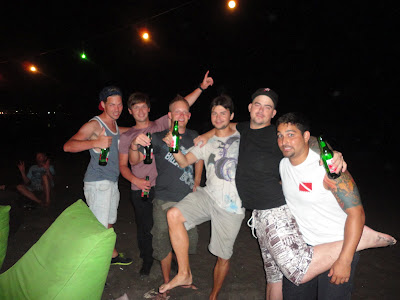 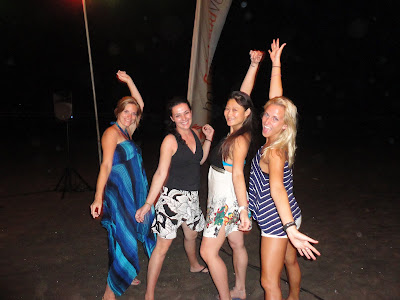 After a full day on the beach we all went back to the hostel and met up with even more people before all heading out to a bar sports bar down the street to watch the Olympics. And let me tell you what...going to a bar in a foreign country like Indonesia, to sit there and drink with 9 other people, all from totally different countries, and all cheer on each other's teams for the 2012 Summer Olympics...absolutely incredible. I honestly don't think I'll ever be able to get those feelings and memories out of my head. I haven't been as happy as I was then in a long, long time. :]

After an hour or two watching the Olympics we all decided to head to a better bar and after some LONG walking, we stumbled across an amazing little bar with bean bags to sit on...on the beach. 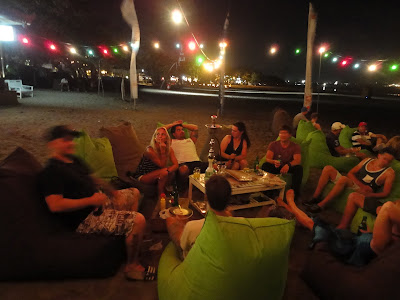 We all smoked some Hasish (don't know if I'm spelling that right), which we call Hookah back home. Had a few drinks and just talked and goofed off like we had all known each other for at least a few months, not just a few hours!!

After the beach Judith headed back to the hostel but all the others were ready to go to a club. I was still sleepy (even though I had slept like 15 hours the night before) and wasn't really in the "SHOTS!" kind of mood, but everyone kept bitching at me to stay so I did...peer pressure!

Now, for those of you who aren't aware...Bali has had a tumultuous history with the night life nearly a decade ago. On October 12, 2002, the main club street in Kuta, Bali was targeted by radical Islamist group. A man with a bomb in his backpack walked into a crowded club and detonated the bomb, instantly killing dozens while the rest fled outside...which is where an even more powerful car bomb in a van on the other side of the road from the initial bomb was detonated, killing hundreds. In total, 202 people died that night and because of this horrible piece of history, the nightclubs have very extreme security measures now.

With the past in the back of our minds, we headed into a popular club, determined to have an absolute blast...and by god we did!! 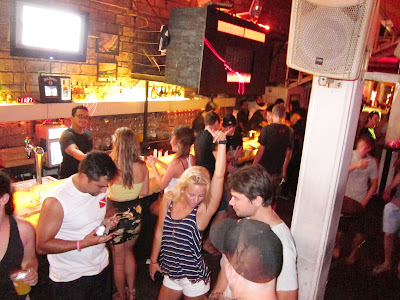 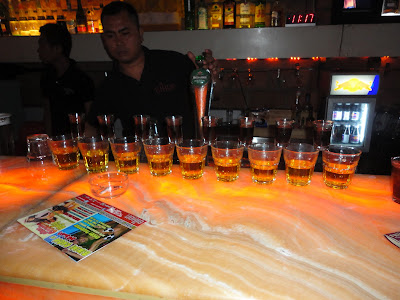 Needless to say, we all had a blast that night and (even with a little bit of drama thrown into the mix) we all left as even closer friends than when we began.

This was only my first real day in Bali and I was already having the time of my life...how could it possibly get even better than this? But, somehow...it did :]