When I arrived in Bali, Indonesia my father (who has become slightly addicted to StumbleUpon) sent me a bunch of cool surfing videos from spots around the island for me to go check out when I had some time. One of the spots he mentioned was a beach on the very southern tip of the island called Padang Padang Beach. The videos looked awesome and when my dad did some more research he found out that the massive yearly Rip Curl Padang Padang Surf Competition was on during the whole two weeks I was there!

So naturally, I gathered up a few people from the hostel and we all split a taxi to head down to Padang Padang (pronounced pah-dong pah-dong) the next morning. And low and behold, we happened to pick the day the surfing competition was on!! 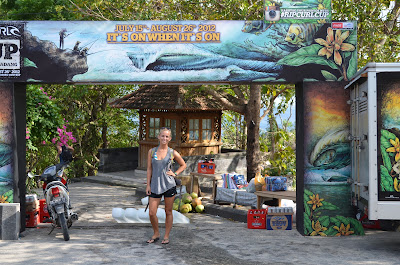 The four of us got there around 8:30 in the morning, and there weren't many people (or vendors) settled up yet. So we headed down the creepy, tiny staircase that's carved in between two massive boulders...and arrived to the most gorgeous beach I had yet to see in Bali! 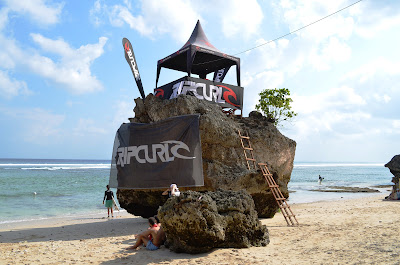 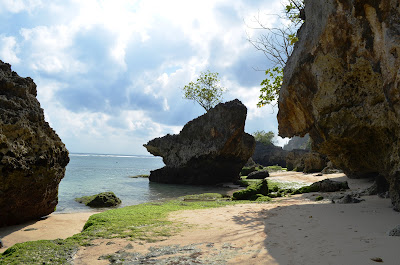 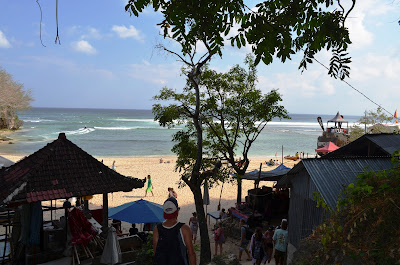 So as I'm sitting in front of the big Ripcurl structure where the judges, announcers, and other surfers are waiting, I look up to see none other than Bethany Hamilton...the famous Hawaiian surfer who had her arm bit off by a shark!! I literally screamed like a little girl when I saw her, but only managed to grab a small shot of her. 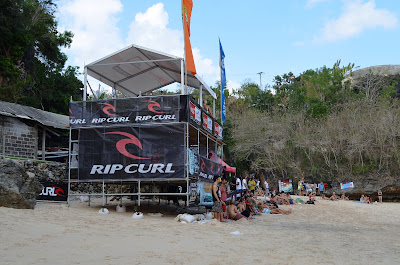 Just an hour after I took this picture, she paddled out to surf the waves, becoming the first-ever female to surf in the Padang Padang Ripcurl competition. The beach was screaming and clapping when she was done. It was a very amazing thing to see.

As the morning faded into the afternoon, the already small beach became absolutely crowded with people from all over the island who had been waiting for the competition to finally happen for weeks. Two of the guys I had come with from my hostel had climbed up on a big rock with a bunch of other people to get a better view for taking pictures, but me and the guy from Germany decided to stay down on the beach and tan while we waited for the competition to kick off. We were quite a ways up from the waterline, but we DID NOT plan things out very well at all.

As a HUGE swell came in, both of us were far too busy taking pictures with our big cameras to realize that big waves out there...meant big waves on the beach as well.

In the blink of an eye, a massive wave crashes onto shore...headed straight for us. We both had our cameras strung around our necks, but we had our backpacks, towels, flip flops...and my iPod on the sand. I managed to grab everything up before the waves reached it (my cat-like reflexes have quite a lot to do with that). But as the wave slammed up to my knees, my iPod that I've had since 9th grade came unplugged from the headphones and plopped right into the water. Once the wave receded I was able to grab it, but I knew that I was going to have no luck getting it to work again. 7 years worth of music...GONE.

I had my self pity party as we both packed up what was left of our now soaking wet stuff and headed over to the big boulder to find the other two guys. The beach was absolutely PACKED at that point, the waves were huge crashing against the shore, AND high tide was rolling in slowly but surely. Within the hour, their wasn't going to be too much of a beach anymore.

So we climbed up the massive rock and manged to score some more amazing surf pictures of the competition. 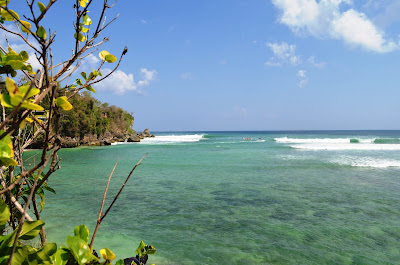 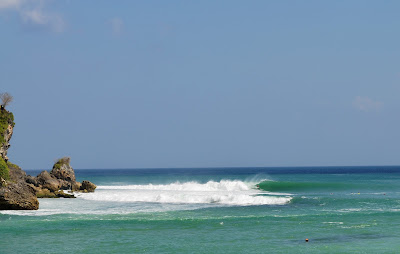 All in all, being able to witness a surfing competition first-hand was a pretty incredible experience. Every day I continue my travels I have more respect and admiration for the sport and everyone in it.

And, I felt like I was doing something for my daddy that he's always wanted to do...a damn good feeling I must say.

The Wonder of Ancient Temples

I'M BACK ONLINE!!! I flew from Jakarta, Indonesia to Gold Coast, Australia exactly a week ago and my friends who had hooked me up with a free bed in their house had no internet! But I just moved to a new hostel down the road and low and behold...I can blog again! :]

So, without further ado...I introduce you to the beauty of the ancient temples in Bali, Indonesia...

Coming from the Bible Belt of Southern United States of America, I was not introduced to other religions or cultures or other ways of life growing up. Things were white, Christian, Southern, and American in Knoxville, Tennessee. It wasn't until I traveled to Singapore last year, at the age of 21, that I saw my first real Hindu and Buddhist Temples.

I was blown away by them then, but the ones that I saw there weren't old. And absolutely nothing like the ancient Hindu Temples in Bali.

After meeting up with a friend of mine who is from Brazil, we toured all throughout the center of the island of Bali where most of the most ancient temples are located. And we were absolutely blown away by the details, the wonder, and the energy of each temple. Whether they were designed for the sea gods, for the monkeys, or for the mountain gods, they were simply STUNNING. 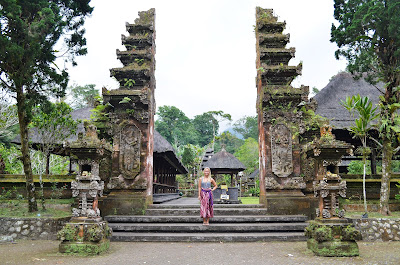 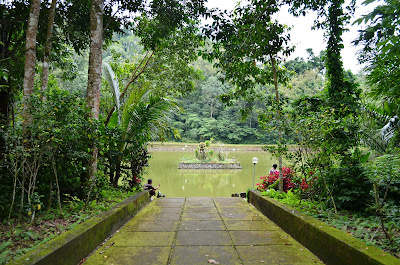 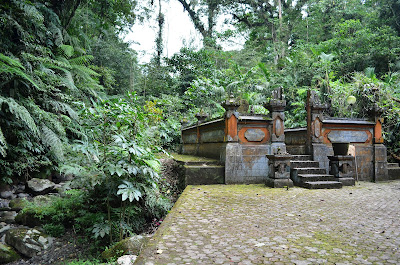 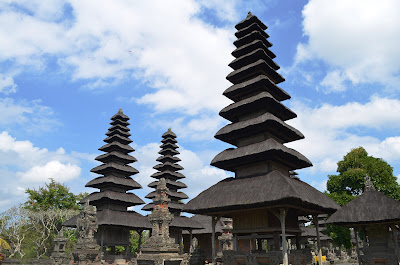 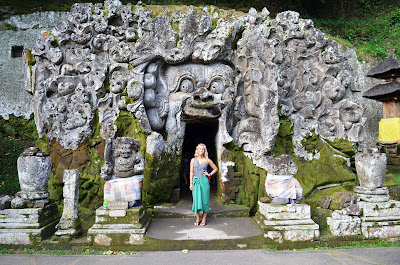 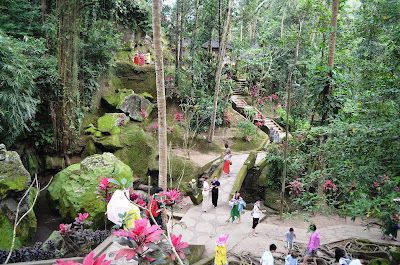 I am not a religious person, but walking across these sacred grounds that have been around for thousands of years...truly humbling. I found myself stopping time and again to have a personal quiet time between me and who I believe is up above. It was very peaceful and an encouraging atmosphere for even the non-believers to experience what it's like to have faith.

BUT, there were a few big downsides to these temples.

1) They were absolutely filthy. All of Bali is absolutely disgusting, trash and rubbish piled up all over the streets and sidewalks. And I had hoped that being at these ancient, holy sites I would finally see the cleaner parts of the island...but I was sadly mistaken. Even at these temples there were giant holes dug throughout the grounds where they threw their trash before setting it on fire. But even those measures didn't clear away all of the trash and debris.

2) The Temples (at least the larger and more popular ones) have been turned into massive tourist hot-spots. Just to walk to the entrance of a temple you have to fight through a horde of women and children all trying to sell you some sort of trinket or sarong or bracelet. Then, even inside the temple there are vendors trying to sell you fresh coconut or Hindu statues everywhere. The desperate hassle to sell you something doesn't even stop there. And while the sites are still used for religious purposes, tourists are the majority of people inside the ground. Taking pictures everywhere and being loud, and completely ignoring the signs that ask you to stay away from certain holy areas. All in all most of the tourists treat these temples as just another place to take pictures...not caring that it is holy, sacred ground for the people of the area and Hindus everywhere. That really started to bother me at the last temple we went to. The blatant lack of respect absolutely sickened me. AND the fact that the Indonesian people allow things like that to take place. At the big cathedrals in Barcelona, Spain tourists were allowed into only the very front areas, reserving the rest of the space for the worshipers. I like that idea a lot better.

3) I've noticed throughout my travels through Asia that women are still deemed much less important than men, but it wasn't until I was reading a sign in front of one of the temples that I realized the full extent of it... 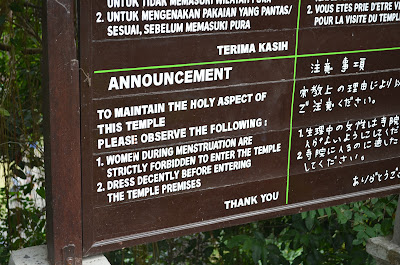 A woman during her menstruation is considered filthy and unclean and therefore, are forbidden to enter the "sacred" and "holy" temples. Now, allowing their temples to be overrun by trash and rubbish and vendors trying to sell you something at every turn is apparently acceptable...but a woman on her period? Well apparently that's where Hindus cross the line. Call me a feminist, but still...RIDICULOUS in my opinion.

But the experiences of touring through those temples, wearing the required sarongs, and running into the wild monkeys was definitely once in a lifetime.

And I promise you won't have to wait very long for my next post...so stay tuned! Because this girl has internet now!! :]